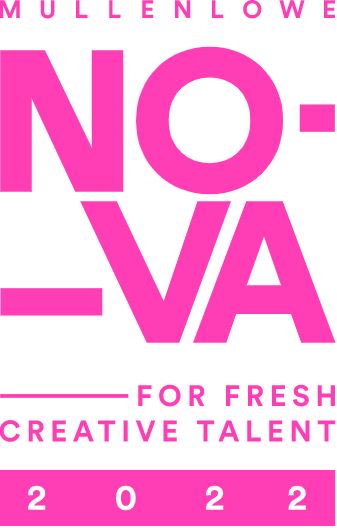 From climate change to queer identity, care for dementia patients to breaking class barriers, today’s young artists are hoping to use art for social good, as shown in the shortlist for the MullenLowe NOVA Awards 2022, announced today.

Now in their twelfth year, the prestigious MullenLowe NOVA Awards provide an unparalleled platform for fresh creative talent, shining a light on the cutting edge of creativity and innovation from the UK’s best art, design and performance school. This year’s shortlist of fourteen pieces, selected from a graduating class of 1,300 students, represent the breadth of artistic expression and diversity of mediums to be found in the UK art world today.

Several pieces on the shortlist demonstrate how artistic creation can be used to solve real-world issues facing our society today. The Bake Kin Set, a set of tools inspired by a graduate’s experience caring for their grandmother, helps those suffering from dementia to bond with their families through baking. A number of other shortlistees look to tackle issues caused by climate change, including architectural project The Honourable Harvest, which asks how reforestation, informed by indigenous cultures and sacred forms, can be used to combat Sahelian desertification in northern Nigeria. Pasta By Design aims to transform pasta from a popular but unhealthy food staple into an ethical, sustainable superfood, creating new pasta designs from plant-based foots such as algae, insects, chestnuts and seaweed. Landless Food explores how microalgae could be used to preserve natural flavours which may be lost by the impact of climate change on agriculture, helping to save culturally important culinary traditions.

Fashion and textiles also feature prominently in the shortlist, with pieces including: Access to Arts: Breaking the Class Ceiling, a documentary exploring the hurdles faced by those from a lower socio-economic background looking to pursue an arts career; Spinster Forever, an exploration of how society has treated, and still treats, unmarried women, told through the medium of textile traditions; and To Trudge In Zundon, an art house film which subverts negative perceptions of housing estates to platform the creativity and voices of queer youth living in these blocks of flats.

Other works on the shortlist include a celebration of porcelain titled In Flux: Between Clay and Glaze, which studies the strength and fragility of the material and looks at how it can be tested and changed. A Concrete Poet Learns to Code uses an online poetry garden to question whether art and technology can co-exist and how human creativity can come together with the structures of the internet. 21st Century Ruin is an experimental short, animated film which follows a character suffering from loneliness, while The Parb Luuang of Luuk Sao uses the artists’ body to discuss how her British and Thai identities intertwine through a feminine lens, commenting on cultural hybrids. Finally, Her World: A Living Archive for Queer Connection is a multi-sensory project which uses art therapy workshops to create profiles for queer women and non-binary people, those often let down by dating apps, to showcase the inner desires, struggles and joys of these groups.

Jose Miguel Sokoloff, Global President, MullenLowe Group Creative Council said: “Art benefits everyone it touches, and for the past decade our purpose has been to bring the brilliance of emerging talent to the forefront of the creative community. Our collaboration with Central Saint Martins has given us a fantastic opportunity to see the relationships we have with the world around us through the eyes of exceptionally talented creators. We’re privileged to be able to recognise their inventiveness while making a significant contribution to help them continue their creative path.

The breadth of creative thinking is as diverse as the mediums the students use, and to say the work is incredibly inspiring is an understatement. It’s also important for me to share this work with a wider audience and make it accessible for everyone through our YourNOVA ‘People’s Choice’ initiative. It’s an honour to be able share the joy and wonder of unbridled creativity with the far corners of the world.”

The winners of the MullenLowe NOVA Awards 2022 will be announced at a ceremony on 14th July, with one winner and two runners up to be revealed. MullenLowe Group’s longstanding client Unilever will present the #Unstereotype Award to a shortlisted work that reflects progressive thinking and breaks away from limiting and outdated stereotypes. Voting is now open for the YourNova ‘People’s Choice’ award, which will be given to the entry which resonates most with the public – voting is now open at https://www.mullenlowenova.com/yournova