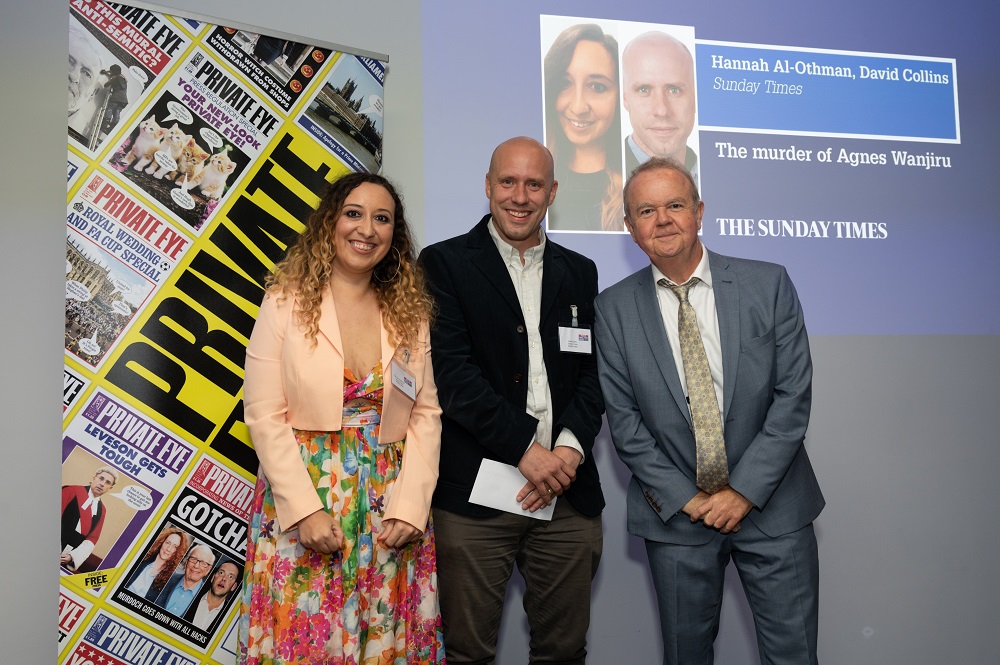 The Private Eye Paul Foot Award for Investigative and Campaigning Journalism 2022 has been awarded to HANNAH AL-OTHMAN AND DAVID COLLINS, THE SUNDAY TIMES for their entry on The Murder of Agnes Wanjiru.

The Sunday Times’ Hannah Al-Othman and David Collins’ winning investigation painstakingly uncovered the story of the murder of Kenyan sex worker Agnes Wanjiru, revealing a disturbing culture of misogyny, secrecy, and impunity in the British army.

Richard Brooks and Nick Wallis were also presented with a special award on the night for their Private Eye Special Report on the Post Office scandal, which exposed one of the most widespread miscarriages of justice on record in the UK, appalling treatment of hundreds of working people and a web of deceit that stretched to the top of an historic British institution. The Special Report ‘Justice Lost in the Post’ by Richard Brooks and Nick Wallis is free to download from the Private Eye website here.

This year saw the return of an in-person awards ceremony, after two years of holding the event online due to the Covid-19 pandemic, and was hosted at BAFTA by editor Ian Hislop.

The previous two Paul Foot Award winners from 2020 and 2021 were both presented with their awards in person on the night. The 2020 winner was Alexandra Heal, who took home the award for her campaign ‘Nowhere to Turn’ which revealed how police forces close ranks when a domestic abuse complaint is made against one of their officers, leaving vulnerable women with no recourse to justice. The 2021 winner was Robert Smith and his team from the Financial Times, for their compelling report which documented David Cameron’s dubious role lobbying for financier Lex Greensill to have access to Treasury Covid relief schemes.

During the ceremony, Ian Hislop also paid tribute to Andrew Jennings, esteemed British investigative journalist who passed away at the beginning of this year.

Ian Hislop, the Editor of Private Eye, said: “A fantastic party where you had to Bring Your Own News. A post-Covid celebration of journalism at its best!”

Padraig Reidy, Chair of Judges, The Private Eye Paul Foot Award, said: “It’s wonderful to honour the winners, and all the great reporting that made the shortlist. The judges are very happy to back a vote of confidence in British journalism.”

A piece on the winner will run in print issue 1576 of Private Eye, out Wednesday 29th June. Interviews with the winner and all the shortlist will also be available to listen to on the Private Eye Page 94 podcast.

THE SHORTLIST NOMINATIONS, IN ALPHABETICAL ORDER BY JOURNALIST, ARE:

Set up in memory of renowned journalist Paul Foot, who died in 2004, the award honours the UK’s most brilliant, talented and determined journalists working in the fields of investigative and campaigning journalism today.