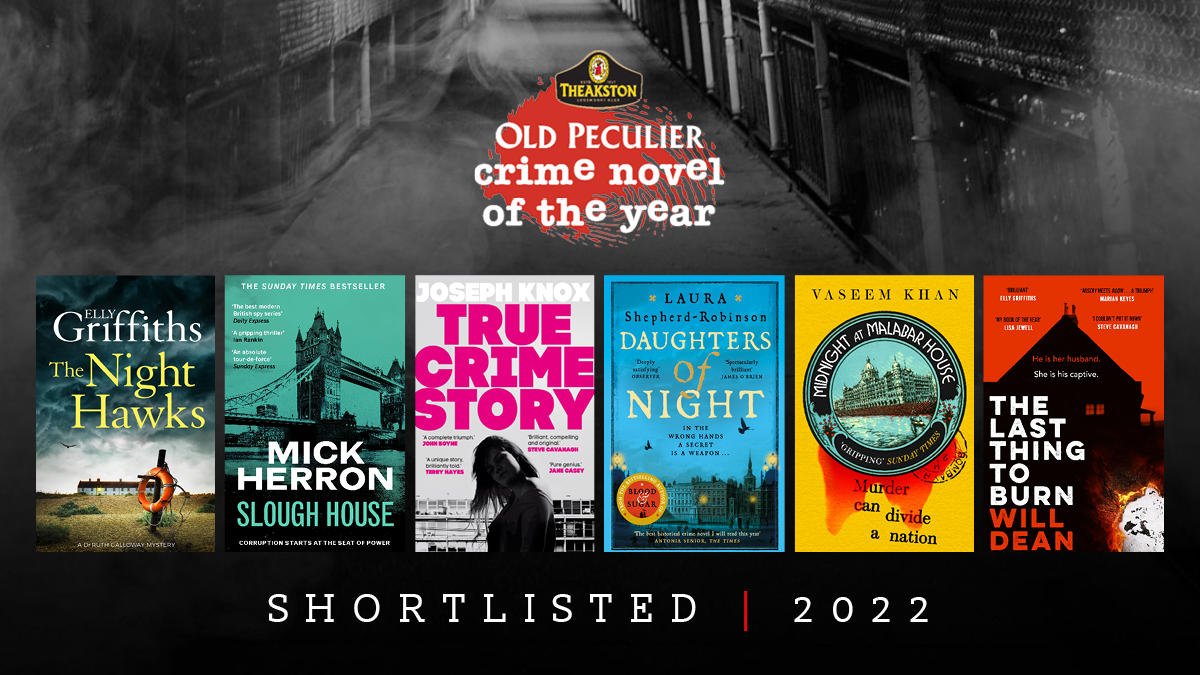 The shortlist for the Theakston Old Peculier Crime Novel of the Year 2022, presented by Harrogate International Festivals, has been announced today, with six bestselling authors competing to win the UK’s most prestigious crime writing prize.

The coveted award, now in its eighteenth year, celebrates crime fiction at its very best, with this year’s shortlist taking readers from newly independent India to the tension of a remote Fenlands cottage, from a nail-biting missing persons investigation in Manchester to the wilds of North Norfolk, and from the hedonism of Georgian London to the murky world of international espionage. Selected by the public from a longlist of eighteen novels, with a record number of votes being placed this year, the list of six novels features newcomers to the shortlist, two New Blood panellists, a previous Festival Programming Chair, and a five-time shortlistee. None of this year’s shortlistees have ever taken home the prize before, making the competition even more tense.

Elly Griffiths, who was the Theakston Old Peculier Crime Writing Festival Programming Chair in 2017, is shortlisted for the fifth time for The Night Hawks, the thirteenth instalment in her popular Ruth Galloway series. The Night Hawks sees Norfolk’s favourite forensic archaeologist Galloway called when a group of metal detectorists discover a body buried on a beach with Bronze Age treasure, a find which will lead to a series of murders seemingly linked to the local legend of a spectral dog whose appearance heralds death.

Sunday Times bestseller True Crime Story, the first standalone novel from Joseph Knox, blends fact and fiction to tell the gripping story of a 19-year-old university student who leaves a party in her student halls and is never seen again. Knox, who was selected by Val McDermid as a New Blood panellist in 2017, was longlisted for the Theakston Old Peculier Crime Novel of the Year 2018 for his thriller Sirens the following year, but has never previously reached the shortlist stage.

Historical crime writer Laura Shepherd Robinson continues her incredible streak as her second novel Daughters of Night is shortlisted for the Theakston Old Peculier Crime Novel of the Year, two years after her debut Blood & Sugar was longlisted for the award in 2020. Robinson’s evocative novel transports readers to the seedy underworld of Georgian London, as Caroline ‘Caro’ Corsham tries to solve the murder of a prostitute in the infamous Vauxhall Pleasure Gardens, an investigation which will delve into the darkest corners of high society.

Bestselling author Mick Herron is longlisted for Slough House, the tenth instalment in his series of the same name, which was recently adapted by Apple TV as spy drama Slow Horses, starring Gary Oldman and Kristin Scott Thomas. Herron will be hoping to take home the prize this year, with 2022 marking the fifth time in the past six years he has secured a place on the shortlist.

Midnight at Malabar House by Vaseem Khan, the first in a new series chronicling the investigations of India’s first female police detective, marks Khan’s first time reaching the shortlist. The novel introduces readers to Inspector Persis Wadia as she is plucked from obscurity in a basement office and tasked with solving the murder of an English diplomat as the country prepares to become the world’s biggest republic.

Finally, The Last Thing to Burn sees bestselling author and New Blood 2018 panellist Will Dean move away from the Nordic setting of his acclaimed Tuva Moodyson series in favour of a claustrophobic thriller set on the British fenlands. The Last Thing to Burn, which has secured Dean his first ever placement on the shortlist, sees a woman held captive in a remote cottage by a man who calls her Jane and insists she is his wife. She has long abandoned hopes of escape, until she finds a reason to live and finds herself watching and planning, waiting for the right moment to act.

The six novels shortlisted for the Theakston Old Peculier Crime Novel of the Year 2022 are:

Sharon Canavar, Chief Executive of Harrogate International Festivals, commented: “We are delighted to announce this year’s Theakston Old Peculier Crime Novel of the Year shortlist, featuring six novels by some of the most exciting crime writers working today. Whisking readers around the world and through time, this shortlist is a fantastic demonstration of the variety to be found in crime fiction. The public have a tough task ahead choosing just one winner and we can’t wait to see who they vote for!”

The public are now invited to vote for a winner at www.harrogatetheakstoncrimeaward.com. Voting closes on Friday 8th July, with the winner to be revealed on the opening night of Theakston Old Peculier Crime Writing Festival, Thursday 21st July. The winner will receive a £3,000 prize, as well as a handmade, engraved beer barrel provided by T&R Theakston Ltd.