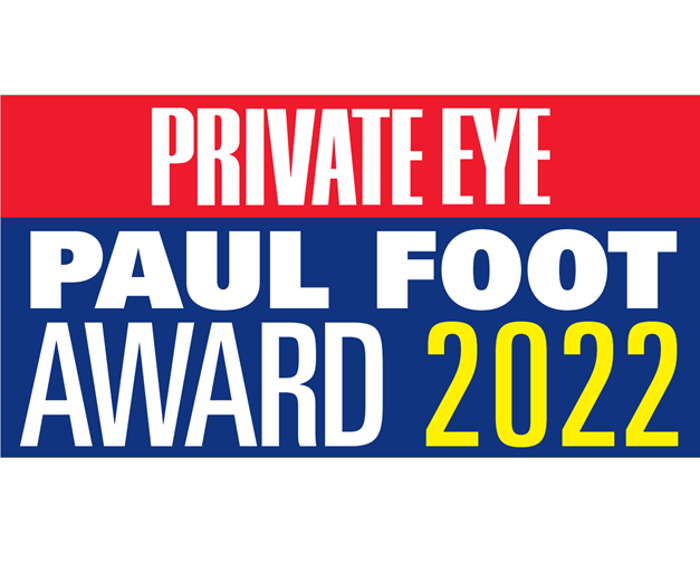 The Private Eye Paul Foot Award 2022 shortlist has been revealed today, comprising the best submissions from digital media, national and regional publications. Against the backdrop of turbulent news agenda over the past year, this year’s shortlist contains an eclectic mix of stories, from political sleaze to labour rights to long-running campaigns for justice, and in-depth investigations into the plight of vulnerable people caught up in the justice and immigration systems.

The awards ceremony will be held at BAFTA on Tuesday 14th June, hosted by Ian Hislop. The winning entry for 2022 will be awarded £5,000 and a piece on the winner will run in the print issue of Private Eye, available on Tuesday 21st June.

THE SHORTLIST NOMINATIONS, IN ALPHABETICAL ORDER BY JOURNALIST, ARE:

Samantha Asumadu, OpenDemocracy: Prisoners may have been refused parole due to fake crimes on file

Susie Boniface, Daily Mirror: Look Me in The Eye

“The extremely high quality of entries this year, submitted even as reporters were stretched to capacity by seismic events at home and abroad, made selection an arduous but incredibly fulfilling experience. As judges gathered in person for the first time since 2019, we were unanimous on one thing: the quality of journalism produced by UK outlets – from Fleet Street powerhouses to independent investigations teams and solo freelancers – is as high as it has ever been.”

Set up in memory of renowned journalist Paul Foot, who died in 2004, the award honours the UK’s most brilliant, talented and determined journalists working in the fields of investigative and campaigning journalism today.

Further information on the shortlist is below.

The Murder of Agnes Wanjiru

The Sunday Times’ Hannah Al-Othman and David Collins painstakingly uncovered the story of the murder of Kenyan sex worker Agnes Wanjiru, revealing a disturbing culture of misogyny, secrecy and impunity in the British army.

Prisoners may have been refused parole due to fake crimes on file.

Asumadu spoke to families of people held on indefinite “imprisonment for public protection” (IPP) sentences. Even though the IPP sentence was abolished in 2012, many people still remain in jail with no end date in sight.

Look Me in The Eye

The Daily Mirror’s ongoing campaign for recognition for the survivors of Britain’s nuclear testing programme challenged the Prime Minister to meet veterans in person and acknowledge the harm they had suffered. In April the PM said the veterans would get “they recognition they deserved”.

Liberty Investigates and the Observer reported on how the brutality of the asylum system drives already desperate people to extremes focusing on the personal stories of people deported on the “Esparto 11” flight.