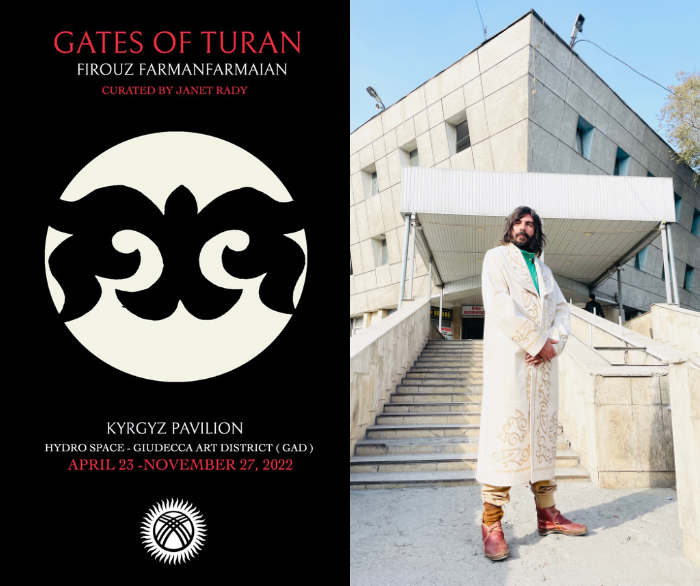 Gates of Turan takes its name from the Persian word Tūrān, meaning “the land of the Tur”, a historic region encompassing modern Uzbekistan, Kazakhstan, Kyrgyzstan, Tajikistan, Turkmenistan and northern parts of Afghanistan and Pakistan. The original Turanians were an Iranian nomadic tribe of the Avestan age, and their descendants make up the tribes of Central Asia and Iran.

Persian born nomad and international contemporary artist Firouz FarmanFarmaian has drawn on his shared tribal heritage with the Turanian nomads of Kyrgyz and his socially engaged practice to create an immersive post-tribal installation for The Kyrgyz Republic Pavilion to explore the lived experiences of Kyrgyz’s modern day nomadic communities.‘Gates of Turan will illuminate the very fabric of Kyrgyz tribal identity by tracing the thread of memory from modern day Kyrgyz through to a shared tribal ancestry.

Firouz FarmanFarmaian’s multi-sensory installation for The Kyrgyz Republic Pavilion at the 59th International Art Exhibition – La Biennale di Venezia will feature ten hand stitched, hand felted Shirdaks designed by the artist to represent the tribal banners of ten nomadic communities of ancient Turan. Set against a black background, the banners lead to a monumental tündük – the central copula of traditional Krygzy yurt – suspended naked from the ceiling to form the point of a meeting place carpeted with white Yak felt.  Throughout the installation the manipulation of light, colour, sound and shadow, will use disembodied sculptural illuminations and soundscapes to animate the spirit of Turanian nomadic culture.

History, identity, the immaterial substance of memory and the post-tribal inform the work of Firouz FarmanFarmaian, whose lifetime as a nomad living in exile in Europe and North Africa has profoundly influenced his socially engaged practice. His work seeks to actively engage in bridging dialogues between past and future, east and west, archaic craft and innovative technology. His social engaged practice of immersion within tribal and nomadic cultures from North Africa to Central Asia underpins his retrofuturist sensibilities and ecological preservationism. His practice possesses a spontaneous energy alongside a deeply symbolic quality that interrogates a multiplicity of currents in post-tribalism, ethnogenesis, politics and philosophy.

Expanding on the post-tribal investigations inherent to his work; Firouz FarmanFarmaian has spent 8 months working with the Altyn Kol Women Handicraft Cooperative in The Kyrgyz Republic. “Altyn Kol” meaning “golden hands” is a female led cooperative that continues to preserve the Kyrgyz tradition of hand crafting Shirdaks and Ala-Kiiz the hand stitched colorful felt floor-coverings used in Kyrgyz yurts, which are only made in Naryn and Issyk-kul – the remote highland regions of The Kyrgyz Republic.

The artist’s collaboration with these highly skilled Kyrgyz craftswomen has led to a textile based installation that uses a range of elements including raw yak wool, handmade felt, Kyrgyz yurt structures and locally sourced pigments. Handmade Kyrgyz felt is unique in that it is made without any sort of spinning, looping, braiding or weaving. Kyrgyz craftswomen exploit the natural properties of Yak wool to shrink and matt together wool fibres under the influence of water, heat and pressure.

The installation also responds to the relationship between Kyrgyzstan’s celebrated epic The Manas and Iran’s famous epic The Shahnama written by the Persian poet Ferdowsi in 1000 AD.

Created more than a millennia ago, The Manas is the world’s longest poem at more than half a million lines and the greatest achievement of Central Asia’s oldest civilization, The Turan. Part of The Kyrgyz Republic’s rich oral tradition, the epic poem was first written down in the late 19th century when the country was part of the Russian Empire. The Manas takes its title from the protagonist of the poem – a hero of supernatural strength. Akin to Hercules or Odysseus, Manas unites the forty clans of Kyrgyzstan against their enemies, the Uyghers, to build the Kyrgyz state.  The tündük at the center of the installation will be split into four parts representing the four warriors that supported Manas in his defeat of the Uyghers.

“This is a historic moment for The Kyrgyz Republic. Being able to celebrate the craftsmanship and creativity of the Kyrgyz people on an international scale is an incredible achievement, and this pavilion is a testament to what our country has to offer the global art community. We are therefore delighted to be working in partnership with Firouz FarmanFarmaian in tandem with Kyrgyz artists and craftswomen for our maiden entry to the 59th International Art Exhibition – La Biennale di Venezia in 2022.”

Building on the foundations of my post-tribal explorations, the GATES OF TURAN presents a multilayered installation-exhibition exploring The Kyrgyz Republic’s immemorial nomadic mythical cosmogony. Through the transforming prism of socially engaged practice, I incepted a dynamic collaborative exchange with Kyrgyz craftswomen and master yurt makers in the country’s highlands. An Ecology of Soul – The GATES OF TURAN bridges concepts of past and present, material and immaterial, contemporary and archaic in order to reconnect and support Kyrgyz craft.

I am delighted to be part of this historic moment for the Kyrgyz people, and through the artistic vision of Firouz FarmanFarmaian, to be bringing their incredible work to a global audience at the 59th International Art Exhibition – La Biennale di Venezia.