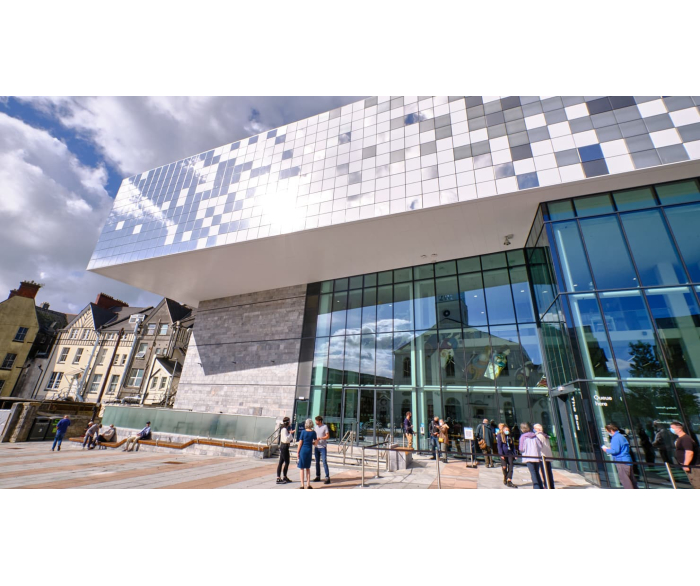 The Box in Plymouth celebrates its first anniversary today – a landmark moment for the museum, art gallery and archive, cementing its status as one of the UK’s leading cultural institutions. Since opening its doors to the public on 29 September 2020, and despite the challenges posed by COVID-19, it’s welcomed more than 100,000 visitors, showcased work by eight international artists, launched a major exhibition for the Mayflower 400 anniversary, secured a blockbuster exhibition as part of the forthcoming UK/Australia Season of Culture and won an array of awards.

In Plymouth, local residents have really taken The Box to their hearts. 75% of visitors during its first three months of opening were Plymothians and it’s received over 200 five star reviews online. Over the summer, when it offered a series of holiday activities for families and welcomed more tourists for the first time, it averaged over 1,000 visitors a day. Its shop has sold over 500 Gus Honeybun toys and nearly 1,000 woolly mammoths!

On 4 October, Victoria Pomery OBE will join The Box as its new Chief Executive Officer. Internationally lauded for a nearly twenty-year role as Founding Director of Turner Contemporary in Margate, she oversaw the capital project that delivered the recognisable David Chipperfield building on the town’s seafront as well as the gallery’s first 10 years of operation. Pomery’s arrival in Plymouth coincides the start of The Box’s next phase of remarkable exhibitions, starting with the European premiere of award-winning Australian exhibition Songlines: Tracking the Seven Sisters, which opens 21 October.

The Box is also the first museum in the UK to be loaned artworks from the National Portrait Gallery as part of its National Skills Sharing Partnership programme. This week, six works have gone on display in its ‘100 Journeys’ gallery featuring Captain Cook, Charles Darwin, Napoléon Bonaparte, Sir Francis Drake and Sir Walter Ralegh, all of whom took part in or led some of history’s most momentous and notorious voyages.

The Box will also be one of the host venues for the final leg of British Art Show 9 next year. Coming to Plymouth from 8 October – 23 December 2022, the exhibition, which is just coming to the end of a highly successful run in Aberdeen, celebrates the work of 45 British artists who have made a significant contribution to international contemporary art including Turner Prize nominees Oscar Murillo and Hurvin Anderson.

Over the last twelve months, The Box has won or been shortlisted for a number of significant awards and accolades, including:

Since re-opening to the public in May 2021 following the third UK lockdown, The Box has presented a new and ambitious exhibition titled Wampum: Stories from the Shells of Native America, centred on the creation of a newly crafted wampum belt, whose beads carry the history, culture and name of the Wampanoag people of Massachusetts. It was the first-ever wampum exhibition to be staged in the UK and formed another key part of the Mayflower 400 commemorations involving the UK, USA, The Netherlands and Wampanoag Nation.

It has also drawn on its extensive collection of Sir Joshua Reynolds paintings to present Family & Friends: Reynolds at Port Eliot, an intimate exhibition celebrating the enduring connection between the Plympton-born master painter and the Eliot family of Port Eliot in St Germans, Cornwall ahead of a major celebration in 2023 to mark the 300th anniversary of Reynolds’ birth.

In July, The Box re-opened two historic buildings and visitor attractions as part of The Box family:  Plymouth’s famous striped red and white lighthouse Smeaton’s Tower and Elizabethan House. One of the few remaining buildings from this era in Plymouth, Elizabethan House re-opened this summer after a six-year, £1.7m restoration, providing a new visitor attraction that takes visitors on an immersive yet authentic journey through 400 years of history.

The Box also welcomed HRH The Princess Royal for a visit in July to celebrate its reopening and its award-winning displays. Her Royal Highness was particularly interested to see the fourteen monumental naval ship’s figureheads suspended from the ceiling in The Box’s main entrance which underwent a two-year restoration process to save them for the nation.

The Box is also home to one of Plymouth’s most exciting new restaurants The Box Kitchen & Bar, now under the helm of head chef Ben Mack. As well as the regular Friday and Saturday night opening, Ben hosts regular themed events with menus focused on locally foraged food as well as local seafood. This summer, The Box also launched The Little Box, a new cafe on Tavistock Place.

Paul Brookes, outgoing CEO of The Box said: “It’s been an amazing journey to get to this point and a challenging but massively rewarding year. I’m so proud of everything that’s been achieved, to have welcomed so many visitors and to have received so much amazing feedback. We couldn’t have done it without the support of the public, amazing funding support from Plymouth City Council, the National Lottery Heritage Fund and Arts Council England, and most of all our fantastic staff and volunteers.”

Victoria Pomery OBE, incoming CEO of The Box said: “I have been so lucky to work with so many incredible artists, organisations and individuals over the years. Having seen first-hand the impact that art can make on people and places I am looking forward to taking the work at The Box forward at such an exciting time for the organisation.”

Nick Kelly, Leader of Plymouth City Council, said: “Plymouth is one of the most exciting destinations in the South West of England, and The Box its star attraction. On the occasion of its first anniversary, it’s great to reflect on the impressive impact it has made on Plymouth, the South West and the UK’s national cultural scene. I look forward to seeing what’s next for The Box.”

Tudor Evans OBE, Leader of Plymouth Labour Group, said: “The Box is celebrating its first birthday – what a wonderful moment to look back at all that’s been achieved despite the many challenges caused by the Covid-19 pandemic. To reach 100,000 visitors in a year full of lockdowns and set-backs is an astonishing achievement and makes me both proud and excited for The Box’s future.”

For all press enquiries relating to The Box, contact: