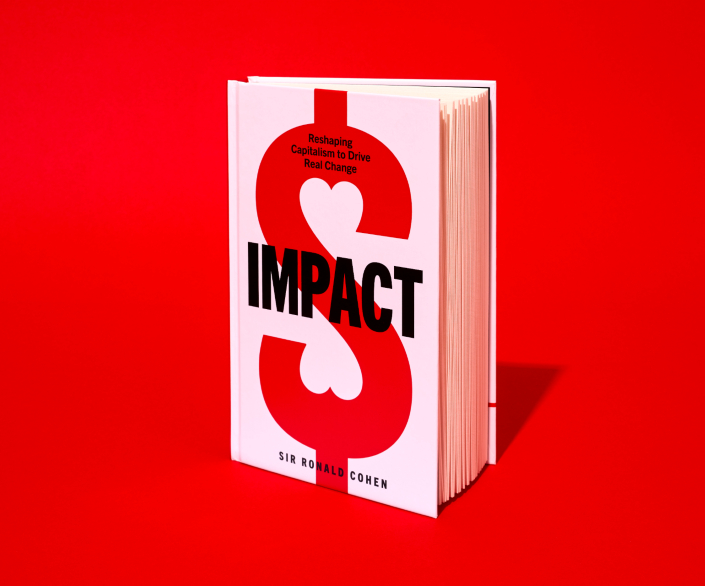 Midas Public Relations, the UK’s leading independent communications agency for books, publishing, culture and the arts, has been appointed by Sir Ronald Cohen to promote IMPACT: Reshaping capitalism to drive real change, published by Ebury and out on 2nd  July 2020.

Sir Ronald Cohen is a preeminent international investor, entrepreneur, philanthropist and social finance innovator, who has dedicated two decades to leading the Impact Revolution to achieve real social and environmental change. He was one of the founders of venture capital, which ushered in the Tech Revolution, and now he has channeled his years of experience into his latest book, a compelling account of how impact is reshaping capitalism. His previous book, The Second Bounce of the Ball, explored how entrepreneurs can turn risk into opportunity, and was described by the Financial Times as “One of the best books written on entrepreneurship in recent years.”

IMPACT: Reshaping capitalism to drive real change is an inspiring manifesto showing that changing the world and making a profit can go hand in hand. At a time when capitalism and democracy are being challenged with great force, we need a new path to reduce inequality, regenerate natural resources and allow people to benefit from shared prosperity. The book has been described as “the core operating manual for those seeking to do good while also doing well” by Bono, Lead Singer of U2 and Co-Founder of The Rise Fund.

The artwork on the front cover of IMPACT was designed by Noma Bar, the artist behind the highly regarded cover of The Testaments by Margaret Atwood. The ingenious design features a dollar sign with two hidden hearts – a reference to the “invisible heart of markets” that Sir Ronald Cohen mentions in his book, which is a nod to Adam Smith’s “invisible hand of markets” and the metaphor for the Impact Revolution.

Midas PR will deliver a high-profile traditional PR and social media campaign that generates widespread consumer awareness of IMPACT, demonstrating the crucial need to reshape our economic system and how impact capitalism can change our world for the better.

Sir Ronald Cohen said: “The Covid-19 crisis is a wake-up call to the world. It will force us to change our ways and to scale the resources we use to reduce inequality and protect our planet. IMPACT reveals how each of us can play a role in achieving this.”

Carey Smith, Publishing Director for Ebury Enterprises, who bought the book from Rory Scarfe of The Blair Partnership, said: “Learning about impact investing from its visionary pioneer has opened my eyes to the way that everyone – from individuals to large corporations – can help preserve our planet and lead us to a more equal world.”

Book publicity in a time of corona by Georgina Moore

Psychiatrist in the Chair: The Official Biography of Anthony Clare by Brendan Kelly & Muiris Houston

Publicity in a time of unpredictability by Jason Bartholomew

Letters to a Young Doctor by Dr Hilali Noordeen

Born Digital: The Story of a Distracted Generation by Robert Wigley

Hugh Grant to star in Audible’s A Christmas Carol

Uncharted: How Uncertainty Can Power Change by Margaret Heffernan

Midas is recruiting for an Account Executive to join our team

First Ever Book Series on Black British Culture, A Quick Ting On, Coming in October 2021

Booksellers Association Announces Indie Books Of The Month For May

Bookshop.org calls on industry to expand online links beyond Amazon

Impact of COVID-19 on Education Focus of What Works? Educational Publishing Conference at The Online Book Fair

LBF’s Research & Scholarly Publishing Forum Asks: How Open Are We?

Booksellers Association Announces Indie Books Of The Month For June

Bookshop.org appoints Midas to lead its US PR comms

The Box Announces Family and Friends: Reynolds at Port Eliot

Courage is Calling by Ryan Holiday

Bookshop.org Reaches $15 Million Earned for Independent Bookstores in Support of the Fight Against Amazon

Around The Table, the new cookbook from Great British Chefs

Booksellers Association announces Indie Books of the Month for September

Bookshop.org Launches New Initiative for Underrepresented Communities to Open Their Own Indie Bookshop

Smugglers in the Underground Hug Trade: A Journal of the Plague Year by William Wall

Gianfranco Meggiato’s Quantum Man: There is No Future Without Memory

Nadine Ijewere: Our Own Selves

Captivate! Fashion Photography From the ‘90s – Curated by Claudia Schiffer

Portrait of an Artist: Conversations with Trailblazing Creative Women by Hugo Huerta Marin

Korean Art: Cultivating The Unexpected at the Opera Gallery

Spotlight on Catalan Culture: the UK’s biggest celebration of Catalan arts and literature