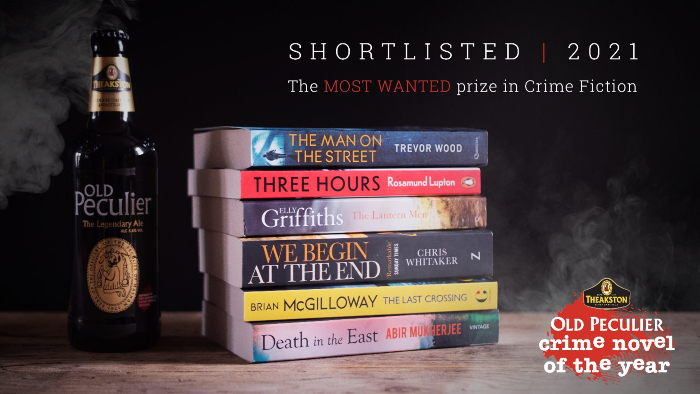 The six authors shortlisted for the Theakston Old Peculier Crime Novel of the Year are today unveiled after being chosen by a public vote and the prize Academy.  Now in its 17th year the most coveted prize in crime fiction – presented by Harrogate International Festivals – celebrates crime writing at its best, transporting readers around the world from Calcutta to California to the frigid North Sea.

This year’s longlist recognises author Chris Whitaker who hopes to claim the trophy on his first ever nomination with We Begin at The End – a powerful story of crime, punishment, love and redemption set in coastal California.

Sunday Times bestselling author Rosamund Lupton’s thrilling story of gunmen opening fire on a Somerset School has clinched a coveted spot on the shortlist. Three Hours sets the clock ticking for the hostages in a nail-biting exploration of white supremacy and radicalisation.

The creator of Norfolk’s best loved forensic archaeologist Ruth Galloway Elly Griffiths is hoping that her seventh prize nomination takes her one step further to take the title. The twelfth novel in the whodunnit series, The Lantern Men sees Galloway return to the fens to hunt down a serial killer.

Trevor Wood’s meteoric rise continues as the debut author goes from being selected for Val McDermid’s highly respected ‘New Blood’ panel at the 2020 Theakston Old Peculier Crime Writing Festival to being shortlisted for the coveted trophy with his acclaimed novel The Man on the Street. As a former naval officer, Wood brings to bear remarkable insight in this story of a homeless Falklands veteran with severe PTSD turned criminal investigator.

Scottish-Bengali author Abir Mukherjee is vying for his latest Wyndham & Banerjee novel Death in the East – described by The Times as “the best so far of an unmissable series”. A mesmerising portrait of India, Assam and East End London, perhaps this third nomination for will prove lucky for the account-turned best-selling author?

The final title on this year’s shortlist is Northern Irish author Brian McGilloway’s second nomination for political thriller The Last Crossing which looks at The Troubles from the perspective of view of former operatives who like to think they have moved on.

The six shortlisted books for the Theakston Old Peculier Crime Novel of the Year 2021 are:

Executive director of T&R Theakston, Simon Theakston, said: “This is it: the crème de la crème of crime. This shortlist really does showcase the breadth and depth of the genre. It’s going to be a fiercely fought prize this year so make sure you vote for your favourite. Until then, I look forward to raising a glass of Old Peculier at the winner’s announcement on 22 July!”

The award is run by Harrogate International Festivals sponsored by T&R Theakston Ltd, in partnership with WHSmith and the Express, and is open to full length crime novels published in paperback 1 May 2020 to 30 April 2021 by UK and Irish authors. The longlist was selected by an academy of crime writing authors, agents, editors, reviewers, members of the Theakston Old Peculier Crime Writing Festival Programming Committee, and representatives from T&R Theakston Ltd, the Express, and WHSmith.