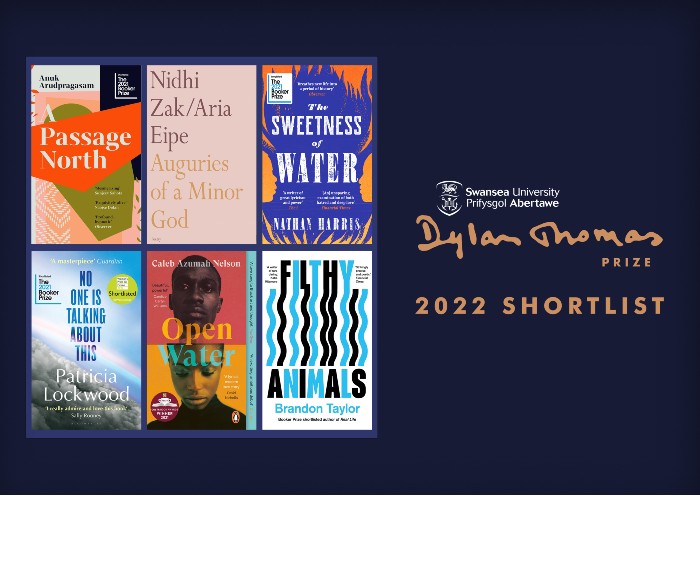 The shortlist for one of the world’s largest literary prizes for young writers – the Swansea University Dylan Thomas Prize – has just been announced. From Sri Lanka to Texas, and Ireland via the Middle East, this year’s shortlist features a powerful, international collection of writers who are offering platforms for under-represented voices.

The debuts on this year’s shortlist include Indian-born Nidhi Zak/Aria Eipe whose first poetry collection Auguries of a Minor God follows two different journeys, the first of love and the wounds it makes and the second following a family of refugees who have fled to the West from conflict in an unspecified Middle Eastern country; the contemporary classic The Sweetness of Water by Nathan Harris who fuses together historical fiction with the complex reality of today’s society; and the achingly beautiful love story Open Water (now sold in 13 territories worldwide) by 25-year-old British-Ghanaian writer Caleb Azumah Nelson who shines a light on race and masculinity.

Also amongst the contenders for this prestigious £20,000 prize are: American novelist and international bestseller Patricia Lockwood for No One is Talking About This, her meditation on love, language and human connection which was also shortlisted for The Booker Prize; Sri Lankan writer Anuk Arudpragasam for his masterful novel, A Passage North, also shortlisted for The Booker Prize which explores age and youth, as well as loss and survival in the wake of Sri Lanka’s 30-year civil war; and Brandon Taylor’s Filthy Animals that brings together quietly devastating stories of young people caught up in violence and desire, while longing for intimacy.

The six strong shortlist was selected by a judging panel chaired by co-founder and co-director of the Jaipur Literature Festival and award-winning author Namita Gokhale, alongside an impressive panel of judges including Welsh novelist, playwright, and winner of the 2006 Dylan Thomas Prize Rachel Trezise; celebrated poet and novelist Luke Kennard, winner of the 2021 Forward poetry prize; novelist and Swansea University lecturer Alan Bilton; and Nigerian-British author Irenosen Okojie who was awarded an MBE For Services to Literature in 2021.

The Swansea University Dylan Thomas Prize is one of the UK’s most prestigious literary prizes as well as the world’s largest literary prize for young writers. Awarded for the best published literary work in the English language, written by an author aged 39 or under, the Prize celebrates the international world of fiction in all its forms including poetry, novels, short stories and drama.

Namita Gokhale, Chair of Judges, said: “The longlist for the 2022 Swansea University Dylan Thomas Prize was one of the strongest ever. The jury has whittled this down to a shortlist that is riveting and compelling on so many levels. It presents a rich diversity of accomplished young and debut voices, and their explorations of the poetic, the historical, and the contemporary.”

The Winner’s Ceremony will be held in Swansea on 12th May, two days before International Dylan Thomas Day.