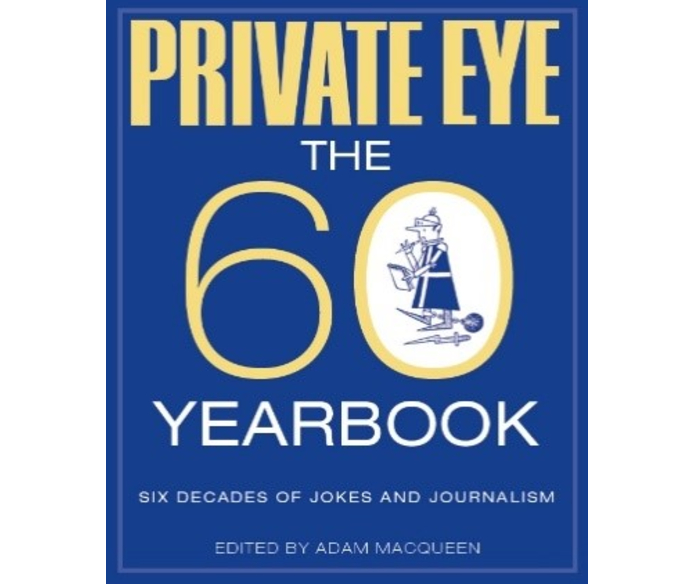 On October 25th this year, Private Eye celebrates 60 years as Britain’s first, most successful and indeed only fortnightly satirical magazine, with the publication of Private Eye: The 60 Yearbook. From the Beatles to Brexit, JFK to Trump, the Moon landings to the Mars landings, it tells the story of the past six decades as they were recorded in the Eye’s pages. The news stories you remember – and plenty you may have forgotten – are retold in cartoons, covers and the magazine’s legendary spoofs as well as extensive extracts from some of its best-loved features like Mrs Wilson’s Diary, Dear Bill and The Secret Diary of John Major.

It is also the story of the headlines Private Eye made itself, from the earliest stirrings of investigative journalism exposing the Poulson Scandal and Ronan Point, through major miscarriages of justice like the Stephen Lawrence case and the Lockerbie cover-up and national scandals that have cost the country billions in dodgy PFI contracts, government cock-ups and secret sweetheart tax deals.

Inside are the stories that led to the fall of two cabinet ministers, countless corrupt business figures and even the official in charge of making sure everyone else in Whitehall’s behaviour was above board. It includes writing by such satirical giants as Peter Cook, Richard Ingrams, Craig Brown, Auberon Waugh and Ian Hislop, and pictures by some of the world’s best cartoonists including Michael Heath, Gerald Scarfe, Nick Newman, Willie Rushton, Robert Thompson and Ken Pyne.

Adam Macqueen is the author of Sunday Times bestseller Private Eye: The First 50 Years, which was published for Private Eye’s 50th anniversary in 2011. He has been a journalist on Private Eye since the early days of Tony Blair, in 1997. He was also on the editorial team of Popbitch, and from 1999-2002 was deputy editor of The Big Issue.

Adam’s non-fiction books include The Prime Minister’s Ironing Board and Other State Secrets (Little, Brown 2013), a compendium of weird and wonderful tales unearthed from government archives, and The Lies of the Land: An Honest History of Political Deceit (Atlantic 2018). His first novel, political thriller Beneath the Streets, featuring rent-boy turned private detective Tommy Wildeblood, (Lightning Books April 2020) will be followed by the second in the series, The Enemy Within, in February 2022.

He lives on the South Coast with his husband, the painter Michael Tierney.

Private Eye is the UK’s bestselling news and current affairs magazine. The Private Eye Annual has become both a seasonal institution and a perennial Christmas bestseller with sales of over 120,000 copies. In August 2021 an updated collection of the popular columns about the coronavirus crisis from Private Eye’s Medical Correspondent ‘MD’ will be published as Dr Hammond’s Covid Casebook.