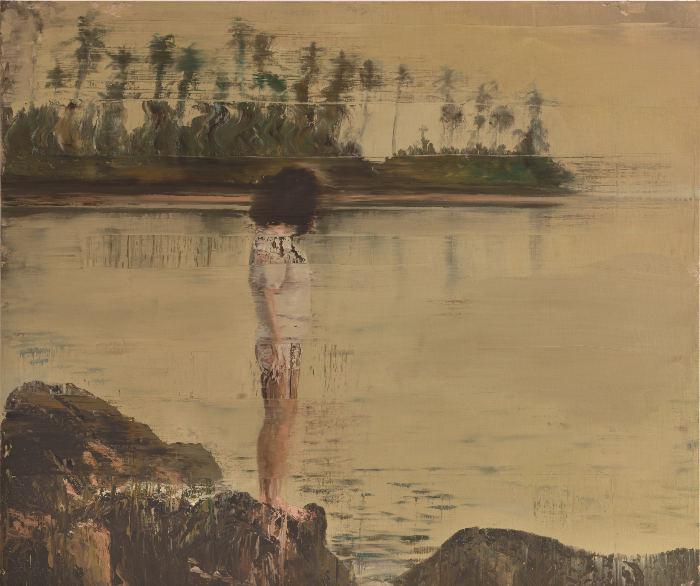 Anatomy of the Mind refers to our capacity as humans to use our minds to travel, even when our physical bodies cannot. What distinguishes this unique series of paintings is the contrast between the still figures and the dystopian landscape. As explained by the artist: “I have painted these new works during lockdown at a time when travelling was not possible. I started to paint these places of longing; it is a form of escapism and a desire to create invented places. Rather than just telling stories or documenting a certain situation, my paintings depict people in a new light. The invented landscapes are the results of multiple layers of different images. The possibilities are endless.”

His portraits and interior scenes are reminiscent of old painting, particularly Italian and Flemish of the 17th century. Denzler’s timeless paintings are created using expressive brushstrokes to approach each subject with great respect and admiration, giving them a sublime dimension.

By taking inspiration from his own photographs, Denzler slowly divulges through each layer of paint the subject of his paintings. While the paint is still wet, the artist uses different brushes and spatula to move the heavy impasto paint, streak and spread the matter in order to create texture. Colour and form fuse in a specific horizontal movement.

As a result of this original aesthetic, Denzler’s creations merge the figurative and the abstract. It is, in fact, the picture of a woman, a man, a couple that one can see on the surface of the canvas combined with large coloured areas, moving surfaces and distortions. Denzler integrates figures and scenes from everyday life and his own imagination. Thus, figuration leaves room to non-figuration and all is united in a neutral palette, composed of more subdued colours such as flesh tones, ochres and browns.

Andy Denzler (b. 1965) lives and works in Zurich. He studied Fine Arts at the Kunstgewerbeschule and at the F&F Schule für Gestaltung in Zurich, at the University of California in Los Angeles and at the Art Center College of Design in Pasadena. In 2016, he received a Master of Fine Arts degree at the Chelsea College of Art and Design in London. His work has been exhibited in numerous solo and group shows across Europe, the United States and Asia, including: The Dark Corner of the Human Mind, Kunstforum Wien, Vienna (2018), Figures & Interiors, Ludwiggalerie Schloss Oberhausen (2015) and the Kunsthalle Rostock, Rostock, Germany (2013) as well as in private and public institutions including the Gwangju Museum of Art, Gwangju, South Korea (2012). He has had two important retrospectives to date: Distorted Moments at the Ludwig Museum in Koblenz, Germany (2014), Denzler participated in the 6th International Art Biennale in Beijing, China (2015), and in the 6th Marrakech Biennale, Morocco (2016). His work is in numerous public and private collections including the Denver Art Museum; the Museum of Modern Art, Moscow; Credit Suisse Collection; the Burger Collection, Hong Kong; the White House, Washington DC; the David Roberts Art Foundation, London, the Tel Aviv Museum of Modern Art, Tel Aviv, Israel and the Museum of contemporary art in Montreal, Canada. A comprehensive monograph was published by Damiani in 2017.

Opera Gallery is an internationally established modern and contemporary art gallery presenting masterpieces by some of the most significant artists of the 20th and 21st centuries alongside works by emerging artists from all over the world, promoting them and developing their International profiles. Founded in 1994 by Gilles DYAN, Opera Gallery now has twelve exhibition spaces in New York, Miami, Aspen, London, Paris, Monaco, Geneva, Beirut, Dubai, Hong Kong, Singapore and Seoul. Aside from its permanent display of modern masterpieces and contemporary art, Opera Gallery organizes at least four dynamic shows and curated exhibitions a year, in each of its spaces. www.operagallery.com

Andy Denzler: Anatomy of the Mind will open at Opera Gallery on 4th June until 27th June 2021.