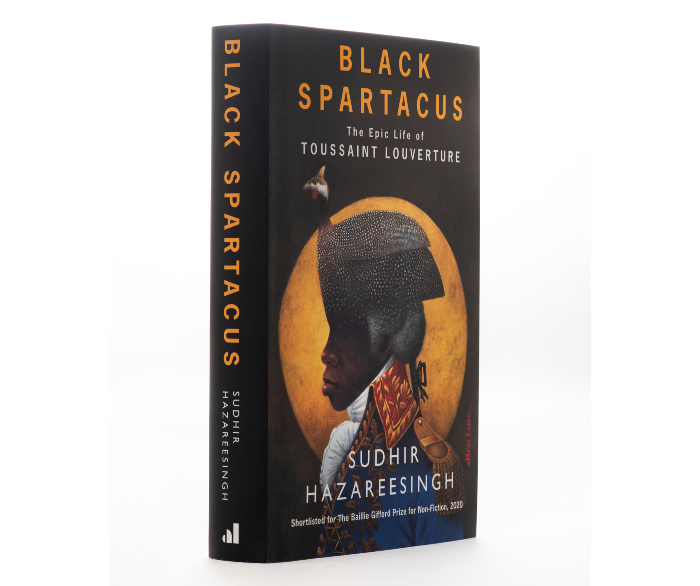 Hazareeinsgh was announced as the winner in a virtual ceremony including a speech by Wolfson Foundation Chief Executive Paul Ramsbottom and the esteemed judging panel. The ceremony can be viewed here.

The Wolfson History Prize, now in its 49th year, is awarded annually by the Wolfson Foundation to a work of historical non-fiction which combines excellence in research and writing, with readability for a general audience. It is the most valuable non-fiction prize in the UK.

Black Spartacus: The Epic Life of Toussaint Louverture (Allen Lane) provides an intimate study of the life of a revolutionary leader whose experiences speak to many of the debates about history and heritage currently taking place. Through a wealth of archival material, much of which has been left uncovered by previous biographers, Hazareesingh creates the portrait of a former slave who confronted some of the dominant forces of the age – slavery, settler colonialism, imperialism, and racial hierarchy.

Hazareesingh triumphed over a shortlist which balanced vast historical explorations with individual narratives, all of which highlighted the importance of analysing the past in order to understand the issues facing us today. The five shortlistees were each awarded £4,000: Rebecca Clifford (Survivors: Children’s Lives after the Holocaust), Judith Herrin (Ravenna: Capital of Empire, Crucible of Europe), Helen McCarthy (Double Lives: A History of Working Motherhood), Richard Ovenden (Burning the Books: A History of Knowledge), and Geoffrey Plank (Atlantic Wars: From the Fifteenth Century to the Age of Revolution).

Sudhir Hazareesingh, winner of the Wolfson History Prize 2021 said: “Completing this book made me realise more acutely than ever how much the writing of history is a collective effort, resting on the accumulated wisdom from current and previous generations, and I would like to dedicate this award to the Haitian people, and to all the scholars who have helped give the Saint-Domingue revolution, this landmark event in the fight for emancipation and dignity, the prominence it deserves.”

David Cannadine, chair of the Wolfson History Prize Judging Panel commented: “Black Spartacus vividly re-creates the extraordinary career of the leader and hero of the Haitian Revolution, which reverberated far beyond that island and far beyond the Caribbean. This is an erudite and elegant biography with a message that resonates strongly in our own time, and we extend our warmest congratulations to Sudhir Hazareesingh.”

In 2020, the Wolfson History Prize was awarded to David Abulafia for The Boundless Sea: A Human History of the Oceans, a global history of humankind told through our relationship with the world’s oceans.

The Wolfson History Prize is run and awarded by the Wolfson Foundation, an independent charity that awards grants in the fields of science, health, heritage, humanities, and the arts.

“For nearly fifty years the Wolfson History Prize has highlighted history that is not only carefully researched but which is accessible and elegantly written. Never have the aims of the Prize been more necessary than in these days of challenge and uncertainty. Sudhir Hazareesingh’s remarkable book is a sparkling example of the role history can play in society today and, in particular, the importance of shining a light on the often-overlooked experiences of the past.”