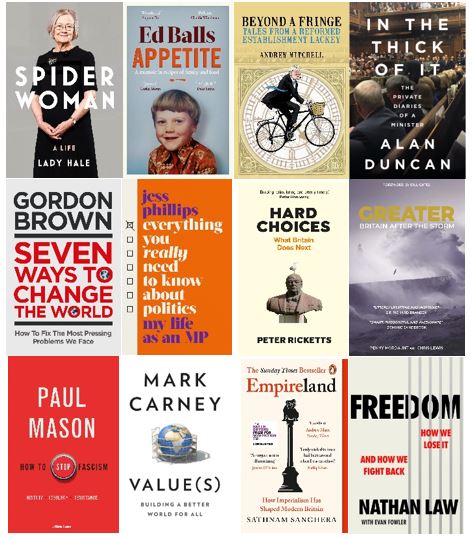 The shortlist for the 2021 Parliamentary Book Awards, the only political book awards voted for by parliamentarians, has been announced today, featuring titles by political figures including former Prime Minister Gordon Brown, Ed Balls, Jess Phillips, Penny Mordaunt, retired President of the Supreme Court of the United Kingdom Lady Hale, and Mark Carney, former Governor of the Bank of England.

Best Biography, Memoir or Autobiography by a Parliamentarian

Best Non-Biographical Book by a Parliamentarian

Best Political Book by a Non-Parliamentarian

Publishers were invited to nominate titles and authors for the awards, with booksellers selecting the shortlists. Voting is now open for parliamentarians to decide the winner in each category. The award winners will be announced on Wednesday 9th March 2021.

Meryl Halls, Managing Director of the Booksellers Association, said: “We are delighted to share the shortlist for this year’s Parliamentary Book Awards, which features some of the biggest names in British politics. With books on far-right extremism, the impact of imperialism on modern Britain, and discussions on how to tackle the most pressing global crises, this shortlist demonstrates the excellence and breadth of political writing which the Parliamentary Book Awards were created to champion. We look forward to seeing which of these titles parliamentarians vote for when the winners are announced at the ceremony in March.”

Stephen Lotinga, Chief Executive of the Publishers Association, said: “The Parliamentary Book Awards were created to celebrate the relationship between politics and publishing. This year’s shortlist shows us the vibrancy of political writing in the UK today. We have engaging memoirs from key figures, books which give us a glimpse behind the scenes of Westminster and visions for how we should shape our future.

“I am hugely looking forward to gathering together with parliamentarians, authors, publishers and booksellers to celebrate these brilliant books.”

The 2020 awards saw an eclectic selection of titles emerge victorious from a shortlist which included political figures such as David Lammy, Andrew Adonis and Magid Magid, with the winners being announced as: broadcaster Iain Dale’s study of the UK’s leaders The Prime Ministers: 55 Leaders, 55 Authors, 300 Years of History, Dan Jarvis’ memoir Long Way Home, and Chris Bryant’s history of the young, queer MPs who fought against appeasement with the Nazis in the 1930s, The Glamour Boys: The Secret Story of the Rebels who Fought for Britain to Defeat Hitler.