Gianfranco Meggiato’s Quantum Man: There is No Future Without Memory 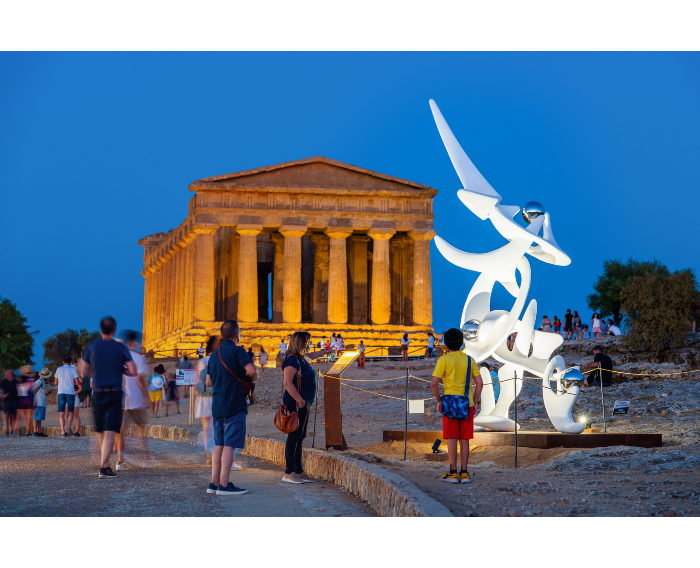 THE VALLEY OF THE TEMPLES ARCHAEOLOGICAL PARK, SICILY
UNTIL 4 JANUARY 2022

Thirteen monumental sculptures weighing more than 21 tonnes by Venice-born artist Gianfranco Meggiato will be presented in an outdoor exhibition at the Valley of the Temples Archaeological Park in Sicily, Italy. Titled Quantum Man: There Is No Future Without Memory and curated by Daniela Brignone, the exhibition juxtaposes stunningly preserved Ancient Greek architecture with quantum-theory-inspired contemporary art and will be on view to the public until 4 January 2022.

It was the little-known British archaeologist Sir Alexander Hardcastle who arrived at the Valley of the Temples exactly 100 years ago in 1921. His consuming passion for unearthing the unique archaeological site saw him pour all his wealth into financing the extensive excavation and restoration project. Overwhelmed by the financial crisis of 1929, he tragically died penniless in an asylum despite having been made an honorary citizen of the city of Agrigento and granted the rank of Commander of the Order of the Crown of Italy. As we approach the 149th anniversary of Hardcastle’s birth on 25 October, Gianfranco Meggiato pays homage to this English archaeologist by dedicating the exhibition to his memory and legacy.

Gianfranco Meggiato said: “When I heard of the sad fate of Sir Alexander Hardcastle – an English archaeologist by now almost forgotten and ignored by most – and realised that 2021 would be the centenary of his commencing work in the Valley, I felt moved to find a way to honour him and restore his reputation, since it was in large part thanks to his passion and generosity that the Valley of Temples came to life a second time and became the UNESCO World Heritage Site it is today.”

Four of the sculptures in Quantum Man: There Is No Future Without Memory have been newly created by Meggiato, who was inspired by a visit to the remarkable ancient temple district – which dates back to the 5th century BC when Sicily was a Greek colony – back in 2018.

All thirteen of the works have been carefully situated within the Valley of the Temples to prompt a dialogue with the rich cultural and mythological contexts of each of the temples, their gods and their legends. For example, two of the sculptures situated outside the temples dedicated to the Dioscuri, the mortal and immortal twin sons of Zeus. Il Volo – The Flight represents Pollux (the immortal son) who gently reaches out a sphere of immortality to share with his mortal brother Castor, represented by L’Attimo Fuggente – The Fleeting Moment, so they wouldn’t be permanently separated.

The justaposition of 2,500-year-old temples with gravity defying contemporary forms creates a dialogue across Space and Time, creating new connections between mythology and history, art and science, cosmology and spirituality. Meggiato was inspired by both quantum theory and ancient philosophy while creating works for the exhibition – in particular the well-worn motto at the Temple of Apollo at Delphi: Know Thyself and the famous double split experiments in quantum physics (a variant of the work by British scientist Thomas Young) where subatomic particles are fired through two slits and their behaviour and nature changes from beam to wave, depending on if they were being observed.

Gianfranco Meggiato said: “’There is no future without memory’ is a deeply held belief of mine. After all, it is through understanding our past, our histories, our origins that we can create futures worth living. The cultures of the 18th, 19th and 20th centuries held a preoccupation with unearthing the ancient world, understanding its secrets, and taking inspiration from the past in a way that we could learn from today. In my work I continuously seek new connections, relationships and comprehension – suffusing abstract forms with deeper meaning, whether philosophical, scientific or cultural.”

Each of Meggiato’s sculptures is comprised of a number of individual pieces which are fundamentally sculptures in their own right. It is through combining these individual sculptures that he creates his final pieces – which stand at up to 5 metres tall.

Regional Councillor for the Cultural Heritage and Sicilian Identity, Alberto Samonà, said “Gianfranco Meggiato’s ‘Quantum Man’ invites us to take a journey into ourselves which is also an encounter through the four elements discovering a universe that goes beyond the rational to set Man in a cosmic dimension. The dialogue between contemporary and ancient here in the Valley of Temples is imbued with a new meaning that spans the centuries to rediscover the roots of the relationship between Man and his deepest essence, in an existential dynamic that goes beyond time.”

Director of the Archaeological Park, Roberto Sciarratta “Gianfranco Meggiato succeeds with great ease in such a difficult undertaking as entering into a ‘sentimental relationship’ with the site of the Valley of Temples without being overwhelmed by its grandeur. We are delighted to host this dialogue and inter-play between ancient and contemporary, thereby bringing Meggiato’s works closer to those of other great artists already present in our own times.”

Curator Daniela Brignone said: “Gianfranco Meggiato composes an ideal journey inside one of the most important archaeological sites in the world, tackling the memory of the past and the enigmatic perspectives of the future to reflect on Man in search of himself. These works open up an inner world around which revolves a repertoire of mythological characters and symbols that become an allegory of Man’s living space. The Quantum science which inspired the artist reveals mystery and cosmic connections.”