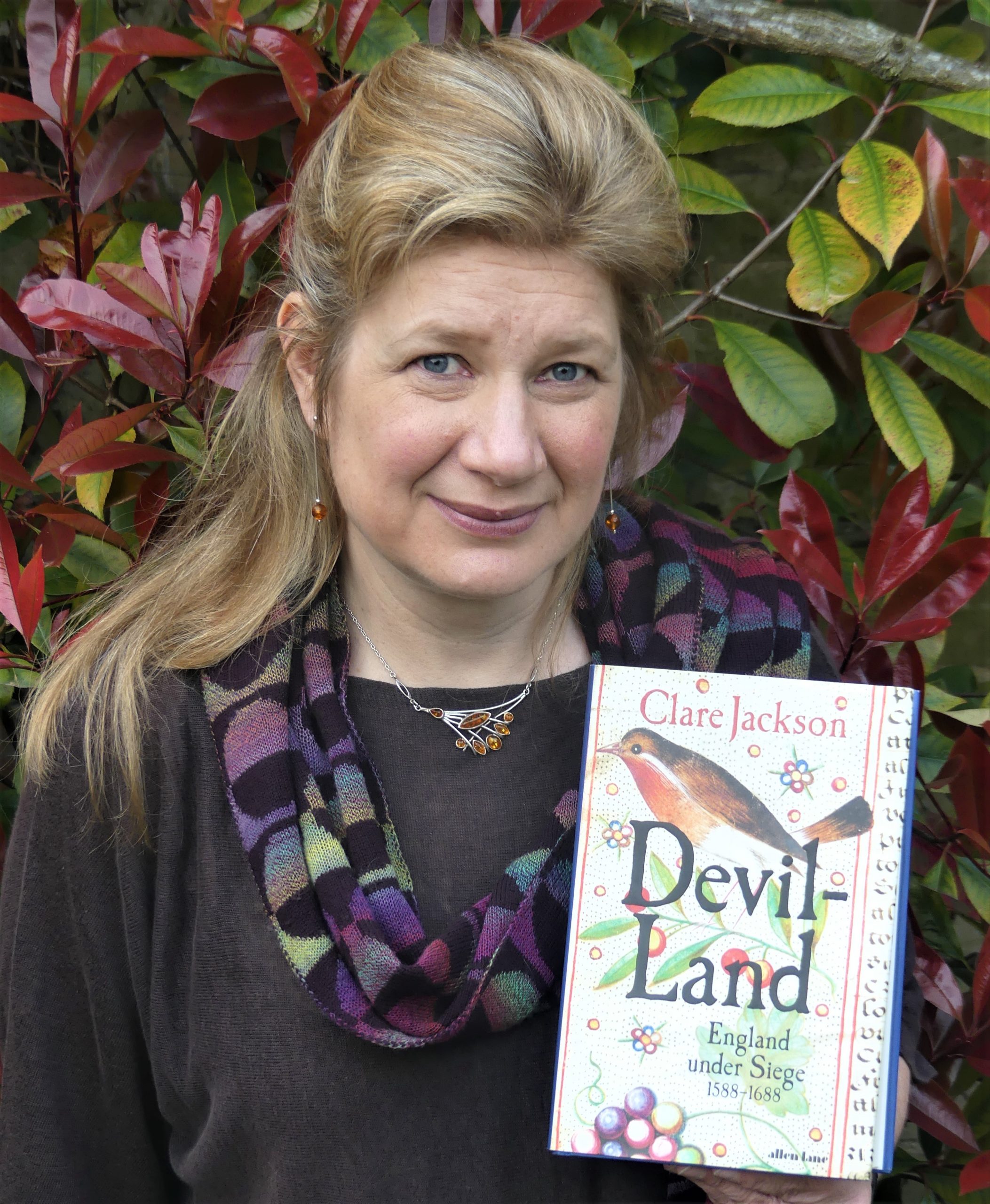 A compelling history of Britain’s tumultuous seventeenth century has tonight been announced as the winner of the Wolfson History Prize 2022, the UK’s most prestigious history writing prize, with Clare Jackson receiving £50,000 for Devil-Land: England Under Siege, 1588-1688.

Jackson was revealed as the the winner of the UK’s most valuable history prize in a ceremony at the Wallace Collection this evening, attended by key figures from the world of history and academia. A virtual winner announcement was also streamed online and can be viewed here.

Celebrating its 50th year in 2022, the Wolfson History Prize is awarded annually by the Wolfson Foundation to a work of historical non-fiction which combines excellence in research and writing, with readability for a general audience. To mark its anniversary, the prize fund was increased from £40,000 to £50,000 this year, with each shortlisted author also receiving £5,000.

Devil-Land: England Under Siege, 1588-1688 (Allen Lane) transports readers to seventeenth-century England, when the chaos of civil war, fire, plague and political division led European neighbours to refer to the country as ‘Devil-Land’. Using first-hand accounts from foreigners living in England, Jackson builds a compelling picture of a nation in a near-constant state of radicalism and crisis, from the eve of the Spanish Armada through to the Glorious Revolution.

Jackson emerged as the winner from a shortlist of six history books, exploring themes such as the role of religion on our collective past and the impact of political and social divisions through the centuries, as well the significance of statues to defining our history. The five shortlisted authors, each awarded £5,000, are: Marc David Baer (The Ottomans: Khans, Caesars and Caliphs), Malcolm Gaskill (The Ruin of All Witches: Life and Death in the New World), Nicholas Orme (Going to Church in Medieval England), Francesca Stavrakopoulou (God: An Anatomy) and Alex Von Tunzelmann (Fallen Idols: Twelve Statues That Made History).

Clare Jackson, winner of the Wolfson History Prize 2022 said: “I am delighted and deeply honoured. I think the two twin characteristics of the Wolfson History Prize are its recognition of academic scholarship and readability for a general audience. I think it’s helpful to remember that we’ve been in lots of dark places before and England’s relationships with its European neighbours in the 17th century were fraught as much as they are today.”

David Cannadine, chair of the Wolfson History Prize judges commented: “Devil-Land is a masterpiece of historical writing: a gripping book that brings to life the drama of 17th-century England, a time of rebellion, regicide, and civil war. By looking at England from the perspective of European observers, Clare Jackson gives us a wider lens through which to view the period, helping us to see ourselves through the eyes of others. Devil-Land is a fitting winner of the Wolfson History Prize in this our fiftieth year, and we offer our warmest congratulations to Clare Jackson.’”

Last year’s Wolfson History Prize was awarded to Sudhir Hazareesingh for Black Spartacus: The Epic Life of Toussaint Louverture, a study of the astonishing life of the leader of the Haitian Revolution. Previous winners of the prize include Mary Beard, Simon Schama, David Abulafia, Mary Fulbrook and Amanda Vickery.

Celebrations for the 50th anniversary of the Wolfson History Prize include a series of free events, in partnership with BBC History Magazine, which will see expert panels discuss key themes in history. Two live events, recorded for the HistoryExtra podcast, will explore ‘History and Science’ and ‘History, Empires and Global Histories’, with panellists including historians Olivette Otele and Sanjoy Bhattacharya, previous Wolfson History Prize winner Sudhir Hazareesingh, shortlisted authors Toby Green and Lindsey Fitzharris, and chair of judges David Cannadine. Two further conversations on ‘History and the Holocaust’ and ‘History and Religion’ will also be released as exclusive episodes of the popular podcast.

The Wolfson History Prize is awarded by the Wolfson Foundation, an independent charity that awards grants in the fields of science, health, heritage, humanities, and the arts.

Paul Ramsbottom, chief executive of the Wolfson Foundation, said: “Since 1972, the Wolfson History Prize has recognised outstanding history writing that is rooted in excellent research, but which also sparkles and is eminently readable. Devil-Land is no exception. Clare Jackson’s engrossing book demonstrates how history can bring fresh insights to familiar events and shed new light on the narratives of our past.”