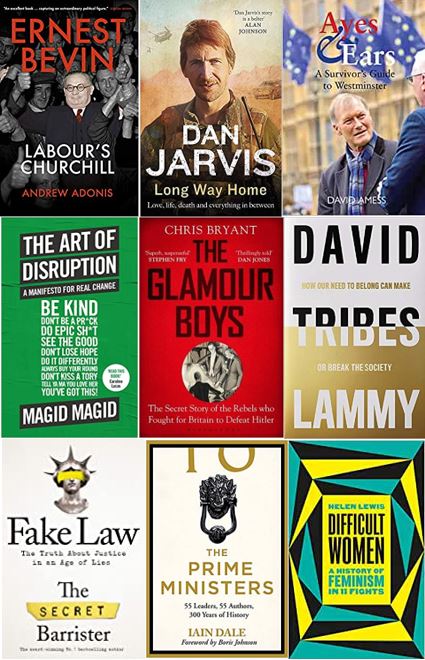 The shortlist for the 2020 Parliamentary Book Awards, the only political book awards voted for by parliamentarians, has been unveiled today, including titles by David Lammy, broadcaster Iain Dale, former Sheffield Mayor Magid Magid, broadcaster and journalist Helen Lewis, and The Secret Barrister.

Now in its fifth year, the Parliamentary Book Awards were launched by the Booksellers Association and the Publishers Association in 2016 to champion the best of political writing and recognise the important link between politics and the book world.

Best Biography, Memoir or Autobiography by a Parliamentarian

Best Non-Biographical Book by a Parliamentarian

Best Political Book by a Non-Parliamentarian

Publishers were invited to nominate titles and authors for the awards, with booksellers selecting the shortlists. Voting is now open for parliamentarians to decide the winner in each category.

The award winners will be announced on 12th March 2021.

Meryl Halls, Managing Director of the Booksellers Association, said: “The Parliamentary Book Awards celebrate the excellence and variety of political writing, and this shortlist certainly reflects these qualities. With books on feminist history, community activism, political tribalism and more, the shortlist demonstrates the range of subjects encompassed by political writing. We look forward to seeing which titles the parliamentarians vote for when the winners are announced in March.”

Stephen Lotinga, Chief Executive of the Publishers Association, said: “The Parliamentary Book Awards were created to celebrate brilliant political writing and this year’s shortlist offers us that in abundance. Between them, the books on this shortlist shine a light on some of the lesser-remembered figures in our political history, give insight into the inner-workings of Westminster, offer inspiration, and address the most important issues of our age – equality and polarisation.

“The announcement of this year’s winners will be held online which will allow more people to share in our celebrations of these important books, their authors, publishers and booksellers.”

The 2019 awards saw an eclectic range of titles emerge victorious, with winners including How to be Right: In A World Gone Wrong by broadcaster James O’Brien, MP Rachel Reeves’ history of female Parliamentarians Women of Westminster: The MPs who Changed Politics, and Ian Murray’s This is Our Story: How the Fans Kept Their Hearts Beating, the story of a group of Scottish football fans who saved their club from financial ruin.