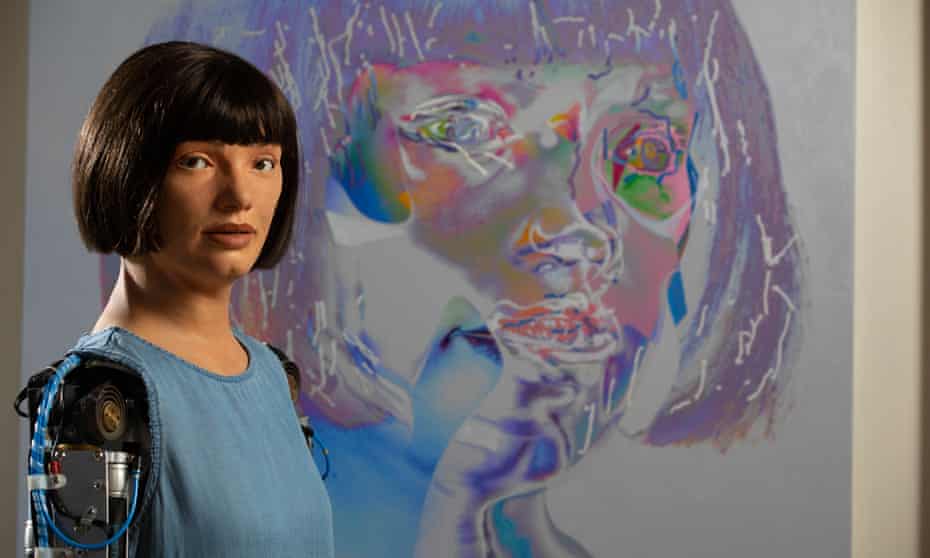 Midas was hired by creator of Ai-Da Robot, Aidan Meller, to implement a PR Campaign for Ai-Da’s inolvement in two major exhibitions one titled Forever is Now in Egypt – the first international art exhibition to take place at the Pyramids in Giza – and the other, Ai-Da’s involvement in The Ashmolean’s exhibition Dante: The Invention of Celebrity which included a poetry recital by Ai-Da. As part of the publicity campaign, Midas pitched for widespread news coverage as well as photo stories and interview opportunities with both Aidan Meller and Ai-Da Robot across national and international news, arts, history, literary, culture and lifestyle, travel and broadcast media. In addition to generating media coverage, a key objective for the PR campaign included positioning Ai-Da as one of the UK’s most innovative and exciting artists who is changing the way we think about the world.

Midas created a three-month PR Campaign to run from the end of September – December to cover both of Ai-Da’s participating events and as such prepared all press materials including two separate press releases and a press pack containing press images and video content of Ai-Da. We prioritised working on Forever is Now throughout October until the exhibition had opened before focusing on Ai-Da’s recital at the Ashmolean Museum.

Having issued an initial pitch to announce Ai-Da’s involvement in Egypt, Midas received news of Ai-Da’s detainment following her arrival in Egypt. In response to this event, we refined our messaging and placed news stories with both The Times and The Guardian who published the news about Ai-Da’s detainment on their front covers which made further headlines in the Daily Mail, i Newspaper, The Daily Telegraph, The Independent, The Mail on Sunday, City A.M as well as being covered by broadcast including the Today Programme, World Service, CBBC,  BBC News, Have I Got News For You and Sky News. Additionally Midas organised for photographers from both Getty and Reuters to attend the exhibition and interview Aidan Meller in Egypt. Key arts media who covered Ai-Da in Forever is Now included Artbribune, Artsy, Arts Professional, ArtLyst, Artnet, Art News, Dazed, Design Boom amongst others. Midas also capitalised on the popularity of Ai-Da in the news and secured a profile interview in Country and Townhouse running both in print and online as well as a broadcast interview with Aidan Meller and talkRADIO.

Throughout November, Midas worked closely with the Ashmolean team and Aidan Meller to arrange a press event to tie in with Ai-Da’s poetry performance. This was arranged for 1st December at the Ashmolean Museum in Oxford. Midas secured news coverage in advance including The Guardian and CNN, while we press attendees at the Ashmolean included The Times, ArtLyst, BBC Radio Oxford, BBC Online, Why Now Magazine. For the Ashmolean project, the two strands of specialist media included literary, specifically poetry, as well as technology and as such, we secured coverage with BBC Radio 3: The Verb, Virgin Radio: Chris Evans Breakfast Show, The Bookseller, Book Brunch and The Times Literary Supplement as well as Techeblog, Tech News Tube, Tech Register and Tech City.

Midas secured 273 pieces of coverage secured across print and digital media for the two PR Campaigns including 143 pieces of international coverage, 20 pieces of national newspaper coverage, 10 pieces of broadcast coverage. The PR Campaign generated an audience reach of over 55milion and £1million AVE for the UK coverage alone

Media highlights included: The Times, The Guardian, The Independent, The Daily Telegraph, The Daily Mirror, i Newspaper and Daily Mail, Today Programme, Sky News, World Service, Have I Got News For You and Talk Radio with interest from ITV 1: GMB and This Morning

“Her artwork reflects on the power of sight and surveillance in the modern world, it’s propensity to elicit distrust, and the tension it can create…”

“Named in honour of the pioneering female mathematician Ada Lovelace, the artificial intelligence (AI) machine can sketch a portrait by sight, compose a “hauntingly beautiful” conceptual painting rich with political meaning, and is becoming a dab hand sculpting, too”

“Mr Meller said that, with developments in AI and robotics, humans are still trying to achieve eternal life in the same way the Egyptians did with mummification and strong belief in the afterlife”

“[Ai-Da’s] artwork encourage[s] discussion about future technologies. Art is what we feel when we are in the moment. It is our vision for the future”

“…the artificial-intelligence-powered robot was created in 2019 by computer programmers, working with experts in both art and robotics, as well as psychologists. Ai-Da has previously shown work in London at the Design Museum and the Victoria and Albert Museum”